There are however, upper and lower limits to what can be considered good or ideal water temperatures. As temperatures rise so does the rate of growth of our Koi. Up to a certain point this is true, but beyond a certain point as temperatures rise, the oxygen saturation levels of water declines. At about 28°C there is no further point in trying to achieve higher water temperature as the amount of oxygen that can be dissolved in the water becomes the limiting factor in conversion of food to growth.

On the other end of the scale below 10°C metabolism is reduced to the point where the body is hardly functioning. Below 5°C Koi go into hibernation. And at around 2°C for any length of time the fish are close to death.

The first point of interest on our comparison graph is the fact that northern and southern hemisphere summer and winter temperatures have been reversed so that the seasons coincide at the same time for comparison purposes.

The area marked between 15°C and 25°C is the optimal temperature for Koi keeping. At this temperature there is maximum growth for a given amount of food ratio. Above 28°C there is a fall in the conversion of food to energy and growth because of the relative decline in available oxygen levels.

Unfortunately, oxygen levels in the water and temperature are not synonymous with each other. High temperatures effect the fish because the D.O. (dissolved oxygen) is LOWERED. At the same time the B.O.D. (biological oxygen demand) of the whole system and fish is RAISED. Higher temperatures increase the toxicity of certain substances in the water as well as the invasiveness, and virulence of bacteria and parasitic pathogens. At higher temperatures the rate of decomposition of organics is much faster than at lower temperatures.

While temperature is critical to Koi growth and health there is a trade off between warm water and very warm water. Up to a certain point higher temperatures produce faster growth but often with fading colours.

In the graph the line marked at 12°C is worth detailed comment. Koi are poikilothermic. Their body temperature is the same as it's surroundings. At higher temperatures body activity is greatly increased. For example energy requirements double between 10°C and 20°C.

As water temperatures decline body activity decreases. At or around 12°C the Koi's metabolism is reduced to the point where the immune system has virtually shut down. Oxygen and food requirements are greatly reduced. Food should be withdrawn at or around 10°C. The blood supply moves slowly around the body. This shut-down is not a switch on or off at a certain temperature, it is a gradual change. Different Koi have different tolerances. Some will be more affected by temperatures than others.

Although pathogenic organisms are also slower in their infection rates at lower temperatures, when introduced into the system, they can be still be deadly as Koi are almost incapable of fighting infection at low temperatures. An advantage of low temperatures is that not only the Koi have decreased activity so does everything else (such as pathogens).

(1) solid line  = unheated pond temperatures in the UK: note the long period of time where the water temperature falls below 12°C and the five months of the year where temperatures are below 10°C.

(2) broken line = pond temperatures in SA (on High veldt): note the few weeks of the year where temperatures are below 12°C. The high levels of sunlight can cause excess algae growth.

Note: Hobbyists should also take note of the rapid climb in pond temperature immediately after winter. The few weeks between the beginning of August and the middle of September can be dangerous times. Through winter the whole system has slowed down or in some cases biological activity has shut down (not died back). The Koi may have not been fed for some time which indicates the biofilter has not received food and has become dormant.

The sudden increase in temperature brings about a sudden increase in activity of the fish. Give the biofilter time to re-establish itself by gradually increasing the feeding rate between August and September and continue with water changes.

Suddenly feeding large volumes of food immediately after winter can bring about a deterioration in water quality and associated gill problems. 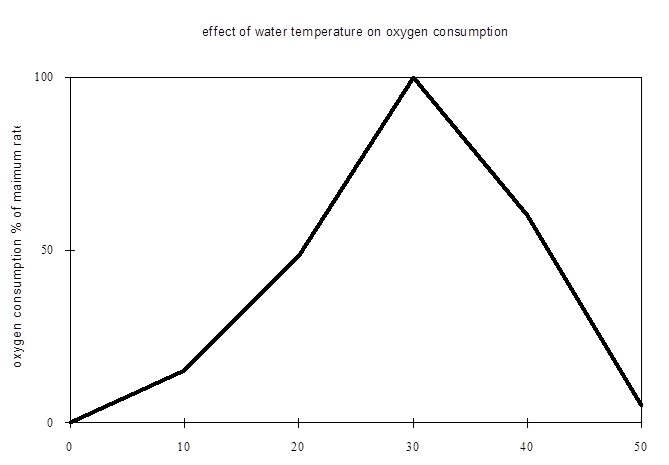 In pond circumstances there is a natural few degree temperature change over a 24 hour period. However, moving Koi between ponds with a temperature variance of more than 3°C or 4°C may cause thermal shock and even death. Temperatures should be gradually adjusted between bags and ponds before the introduction of Koi. A temperature change of 0.2°C/min can usually be tolerated.