Koi Pond Stocking Density - How Many Koi Should You Keep?

In our wonderful hobby – Koi keeping – we all tend to fall into a deadly trap, the trap of over stocking our ponds. Koi keepers often keep every Koi they buy for as long as possible. Often the quality deteriorates but we still keep them and they keep on growing.

One of the fundamental principles of good Koi keeping is good water quality. Look after the water and the water will look after your Koi. As we add Koi so the pond environment deteriorates as Koi are continually feeding and growing. This in turn means that the oxygen is continually extracted from the water and toxic ammonia is added. Consequently the number of Koi that can be safely kept in a Koi pond (given volume of water) is limited.

It is very important to keep this in mind - each Koi needs a minimum amount of water to live a healthy life and grow to its full potential.

Water has a limited Koi carrying capacity. The oxygen that is dissolved into pond water being one of the main considerations for life is limited. Further as Koi excrete toxic ammonia directly into the water there are limits as to the amount of ammonia Koi can tolerate in a given volume of water – even with filtration.

Then from an aesthetic point of view it is far better to have fewer high quality Koi than many poor quality Koi. Try it one day – if you are over stocked remove the poor quality Koi or the Koi which are the poorest quality in your pond and then have a good look at your collection again. Suddenly the better quality Koi will look better!

Lets us look in detail as to why are stocking densities are so important in Koi keeping?

Facts You Must Know

Every time a Koi doubles in length it has about 8 times more body mass. Than when the fish was half the size

This has severe implications on your pond and filter system. 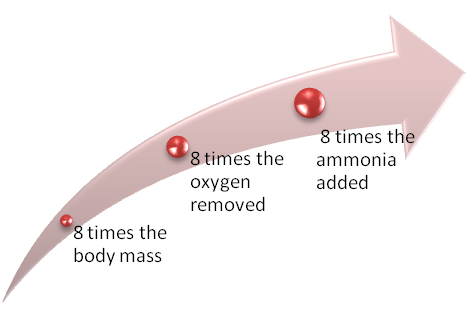 Higher stocking densities run a greater risk of the collection suffocating in the event of the pump being of for some time.

The graph of the estimated mass of Koi as they grow illustrates the influence grow and stocking densities have on a Koi pond. We have the same pump and the same filtration system but the Koi are increasing in numbers as we add more Koi AND they are influencing the pond water quality because of their increasing size. 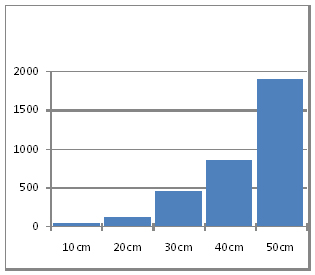 After a year or two, if your Koi have doubled, in length it may be decision time – 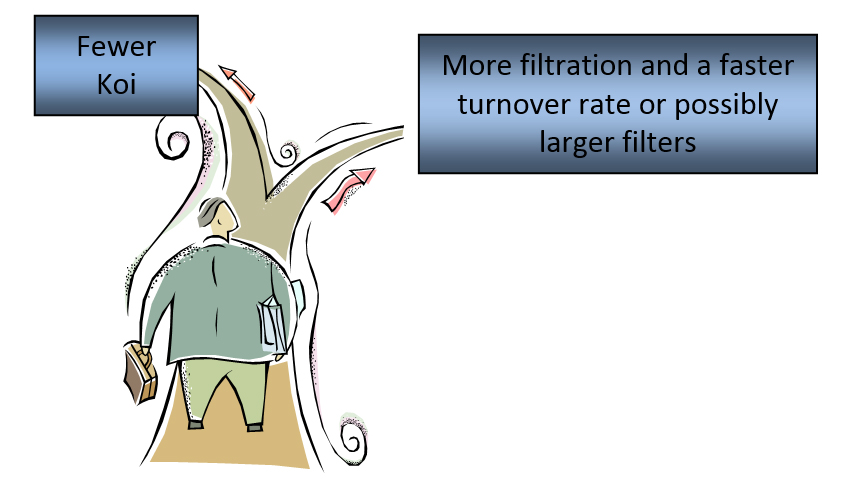 So the pond has suddenly become over stocked when the koi have grown and this is without any new additions.

A study by Perlmutter, Alfred, Daniel Sarot, Man-Lin Yu, Rocco Filazzoia and Seely on the Effects of Crowding on the Immune Response of Fish indicates that there are "other" hidden factors at work than first meet the eye.

These are not readily visible or apparent to most koi keepers. Sometimes we simply notice that our koi die without explanation. Perhaps the study by Perlmutter et al can throw some light on this phenomena.

Their study may indicate that fish kept in overcrowded conditions suffer impaired immune systems as a result of biochemical agents released into the water by the other fish living in the pond.

This may be nature’s way of reducing a large population to more acceptable levels. The studies suggest that fish can release immune suppressing pheromones (hormones) in overcrowded conditions. This makes the other fish in the system less able to fight disease.

The water in the treatment groups had methylchloroform added to remove organic substances. The control groups were not treated but simply monitored. Ammonia, nitrate, dissolved oxygen, carbon dioxide and pH were monitored regularly.

The immune systems were challenged with infectious Pancreatic necrosis virus. All fish in the treatment and control groups were injected with the virus two weeks after the experiment began. Two week later they were injected again.

The researchers made antibody tests. These antibody measurements showed that maximum antibody reaction occurred three weeks after the second injection of the virus.

As the level of crowding increased so the difference between the groups increased. The implication was that the methylchloroform was removing something from the water that affected the fish immune response.

This unknown factor was directly proportional to the crowding level.

To check their findings the authors then decided to refine a third experiment. This third experiment was run twice with each of the four treatment and control groups. These being 30, 15, 5 and 5 fish again.

The results were as follows.

1. The groups of fish at low stocking densities had twice the antibody level of the control groups.

2. The groups with slightly higher stocking densities had four times the antibodies present.

3. However, as the stocking densities increased the effect of the immune suppressing agent became more pronounced. There were less and less antibodies recorded in the test groups.

Conclusions: Low stocking densities can help minimise bacterial and viral disease problems. It is presumed that the fewer the fish in the water the less the concentration of pheromone present that suppress the immune system.

The offending pheromone can be removed with proper chemical and physical techniques.

The importance of water changes should never be under estimated. Regular water changes will dilute the biological 'soup' the fish swim in. To save water utilise the pond water for watering the garden and supply the fish and pond with fresh water. Both will benefit, as will your pocket. The question arises as to how much water should be changed regularly. A minimum of 10% per week is advocated. However, there is strong evidence that larger water changes are extremely beneficial.

The use of activated carbon has been shown to remove organic agents such as pheromones.

Skimming the frothy bubbles or scum that forms on the surface of the pond (Dissolved Organic Compounds or DOC) from time to time will also lower the level of pheromones. The DOC should be removed from the system and not simply skimmed back into the filter.

A last consideration. Perhaps we should select and remove Koi from our collections regularly. As they grow and as we add new ones to the system voluntary removing the old ones which are not of good quality will have positive results.