Media is used in the biofilter as well as in the filter. The term media applies to both utilisations.

Used in a mechanical filter, the media is there primarily to provide a barrier to assists in trapping and removing solids from the passing water. The void space between the pieces of media is less than in a biofilter.

In a biofilter the media is used to increase the available surface area for the beneficial bacteria to grow on.  The void space in the media should be large enough to allow for even and unrestricted water flow.

The material we use in the biofilters to provide a surface area for bacterial growth is called the media. The media is the heart of your filtration system. The success or failure of the whole system is dependant, to a large extent, on the media. (size, depth, type of material etc.)

A huge variety of materials can be used as biofilter media, or for that matter mechanical filter media. It is critical that the media must be inert and not affect the water quality in any negative way. Always be sure that all materials are non-toxic and will not release chemicals that will be harmful to the fish. It is always a good idea to thoroughly wash the media before as a filter media.

Examples of media used in both biofilters and mechanical filters:-

Plastic in various forms has become a very popular media for use in Koi pond filtration. Plastic is convenient and light to work with. One drawback is that it can be very expensive. Another is that the microscopic surface provided by plastic for nitrifying bacteria is often very smooth. A settlement tank or mechanical filtration of some sort to remove the solids before the biofilter is necessary to prevent contamination of the media by debris.

Obviously media with a rough surface will be more habitable for bacterial growth than media with a smooth surface.

The total surface area available for bacterial growth in a biofilter can be increased by increasing the volume of the media.

The effectiveness of the bioconverter can be increased in two ways:

Although media with a large surface area can mean smaller biofilters, (faster flow rate), we must always be conscious that the bacteria competing for space – the heterotrophs – grow faster and take up more space than the nitrifying bacteria.  A compromise must be found between massive surface areas of media, (small biofilters), and the very fast flow rates that will either scrub some of the bacteria off the media or move their food supply past before they can utilise it. 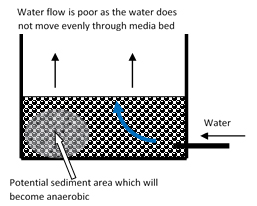 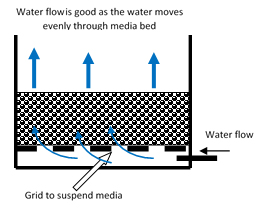 In an open trickle filter the water flow will be even as the water is sprayed over the top of media bed and dispersed. The water moves rapidly cascading and trickling evenly through the filter media as a thin film of water.

Up flow biofilters must be designed in such a way as to ensure the water moves evenly upward through the media. This can be achieved with a simple design feature by suspending the media off the floor in an up-flow or down-flow chamber, (see diagram above).

Packing the media evenly on the grid provides a large surface area for the water to flow through. The open chamber underneath the media makes flushing easier.

Physical Lay-out of the Media

The way the media is packed inside a biofilter chamber can have a significant influence on its efficiency. It is critical that little or no channelling takes place in the media. Any channelling will result in water by-passing a portion of the media and the biofilter becoming less efficient.

Having the media suspended off of the floor in a submerged media bed allows an even flow of water through the media. It also assists with the back-flushing of the media.

Media beds with channelling will have pockets of solid and organic build-up which will be deprived of the oxygen in the passing water. (see diagram above). Such areas will become anaerobic producing smelly and toxic hydrogen sulphide. Further, channelling will allow a portion of the pond water to return to the pond with the impurities it brought into the filter chamber as well as the toxins produced by the anaerobic conditions within the chamber.

Effects on Flow Rate with Different Media in Different Chambers

Chambers with different media sizes can have a greater or lesser tendency to ‘back up’ or clog due to their different flow characteristics.

Whilst it is anticipated that a deep filter bed will have less and less oxygen in the levels farthest from the inlet, there is much evidence that this phenomenon is insignificant in most instances.

As ammonia and oxygen rich water pass through the media with nitrifying bacterial colonies growing on them, the ammonia will be removed in the presence of the oxygen. Although this is done immediately on contact the bacteria do have a finite ability in this regard. Any residual ammonia flows on to the next colony and to the next, etc., any ammonia or oxygen not used by the bacteria simply passes on to the next part of the system.

When the bacteria in the biofilter are saturated with ammonia the excess ammonia passes to the next portion. As soon as they need nutrition (ammonia) they begin the oxidation process again. This is an on-going and dynamic process in the media bed and should not be viewed as an on – off type of situation.

The main concern with deep media beds is the build-up of organics and the subsequent difficulty in cleaning. It is anticipated that the mechanical filters will remove most of the solids in the pond water before it reaches the bio filter. In reality, there will always be a small amount of solids passing into and being trapped by the biofilter.

The bacteria that colonise our biofilters also attach themselves to all surfaces in the pond and form colonies. Because they are permanently attached to a surface, their food and oxygen must be brought to them. They cannot seek their own nourishment. Therefore, the water laden with the food (ammonia) and oxygen must come into contact with the microscopic layer of bacteria (biofilm). Another conclusion that can be drawn from the fact that the bacteria adhere to a surface area is that the water passing by should move continuously. In other words the pump or pumps must run 24 hours a day to bring the necessary nourishment and oxygen into contact with the bacteria.

As the water passes the bacterial colonies a chemical reaction occurs and they oxidise the ammonia to nitrite in the presence of oxygen. Other species of bacteria in the colony will oxidise the nitrite to nitrate, also using the oxygen in the passing water.

The biofilter virtually becomes a living entity after it matures. It is home to millions upon millions of bacteria and micro-organisms that are working in our favour by purifying the passing water.

Nitrifying bacteria growing in the biofilter co-inhabit the media with a host of other organisms such as heterotrophic bacteria, fungi, etc.

Various bacteria occur naturally in pond water. Several species of bacteria are of utmost importance to re-circulating ponds such as koi ponds. They are the ammonia oxidizing bacteria or nitrifiers. Nitrosomonas, Nitrosococcus, Nitrosospira, Nitrosolobus and Nitrosovibrio are bacteria associated with the oxidation of ammonia to nitrite. Nitrobacter, Nitrococus and Nitrospira bacteria oxidise nitrite to nitrate. These Nitrifying bacteria require oxygen to oxidise the ammonia.  They also use carbon dioxide as their primary inorganic carbon source. Nitrifying bacteria adhere to surfaces – all surfaces – and eventually form biofilms. These biofilms are very protective and are host to many other microscopic organisms.

Individual bacteria are easily killed by antibiotics and chemicals. However, once bacteria cluster and form biofilms they become protected, are very resilient, often change and are virtually indestructible.

Biofilms are very hardy and the slime they excrete accounts for the slippery effect on pond surfaces. The biofilms must be looked after at all times as they serve the vital function of eliminating toxins (ammonia) from the pond.

Where do Biofilms Form?

Biofilms from on all aquatic surfaces from the inside of the pipe work to the media we provide in the biofilter. Biofilms develop in areas where there is a food source and an oxygen supply.

By channelling the pond water through the biofilter we are creating an area where a food source (ammonia) and oxygen are concentrated in a relatively small area. We bring the food source (the ammonia) to the bacteria and we supply the oxygen needed to perform the chemical conversion.

How do Biofilms Form?

Initially single cells and single bacterium begin to adhere to surfaces. This occurs rapidly after the start-up of a pond. At this stage of development the individual bacterium is very vulnerable to chemicals and antibiotics. In the early stages of development the numbers of bacteria are limited and time is needed for the biofilm to mature to its full potential.

How Strong are Biofilms?

Do not be afraid to flush the biofilter and mechanical filter regularly. The biofilm on the media, once established, are very hardy. A good flush to waste from time to time will strip away the organic build up as well as the excess biofilm that has development and will not harm the nitrification process.

Antibiotics and chemicals will not destroy the biofilm. Some minor damage may occur to the outer layers of the biofilm but it will recover very quickly.

Koi keepers sometime worry about high flow rates stripping off the biofilm. As biofilms grow on all the surfaces of the pond, including inside the pipes where the water is moving very quickly, this must not be true. The structure of the biofilm changes with the velocity of the water. Slower moving water produces a fluffier biofilm whereas faster moving water produces a more compact biofilm with the excess biofilm sloughing off.

Heterotrophic bacteria can and do over-whelm the nitrifying bacteria in ponds with high organic loads.

“In the past few years, scientists have learned how to observe the inner structures of biofilms or mucilages, which are built and populated by plain, humble bacteria such as E. Coli, salmonella and others. New findings about the genetics and biochemistry of biofilms are reported.”

“The mature, fully functioning biofilm is like a living tissue on the pipe or wall surface. It is a complex, metabolically cooperative community made up of different species each living in a customized micro-niche. Biofilms are even considered to have primitive circulatory systems.“

"Different species live cheek-by-jowl in slime cities, helping each other to exploit food supplies and to resist antibiotics through neighbourly interactions. Toxic waste produced by one species might be hungrily devoured by its neighbour. And by pooling their biochemical resources to build a communal slime city, several species of bacteria, each armed with different enzymes, can break down food supplies that no single species could digest alone.”

“The biofilms are permeated at all levels by a network of channels through which water, bacterial garbage, nutrients, enzymes, metabolites and oxygen travel to and fro. Gradients of chemicals and ions between microzones provide the power to shunt the substances around the biofilm." (Coghlan 1996)

This biofilm structure was described by Andy Coghlan as a “Slime City”.

Dr. Andy Coghlan describes Slime City - "In most cases, the base of the biofilm is a bed of dense, opaque slime 5 to 10 micrometers (197-394 microinch) thick. It is a sticky mix of polysaccharides, other polymeric substances and water, all produced by the bacteria. Soaring 100 to 200 micrometers (3940-7870 microinch) upwards are colonies of bacteria shaped like mushrooms or cones. Above street level comes more slime, this time of a more watery makeup and variable consistency with a network of channels through which water, bacterial garbage, nutrients, enzymes, metabolites and oxygen travel. "Slime City" (Coghlan 1996)