Why should you entertain your Koi? 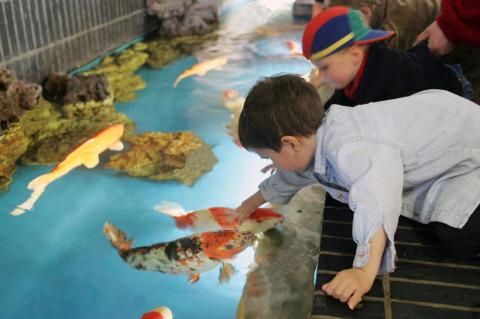 This article is a continuation of what we've learned about fish intellegence.  Turns out that learning how to motivate and stimulate fish could be the key to their very survival in the wild!  The parallels for our Koi are clear...

On a cloudy day a few years ago, Heikki Hirvonen sat on the banks of the River Varisjoki.

As he watched its high, fast water sluicing through Finland’s remote northern spruce forest, his mind drifted back to the year before, when the river was almost dry. He thought of the juvenile salmon he’d then released into a nearby stream, hoping they would one day return from the ocean to spawn.

And then he did something remarkable. He stopped thinking like a human, and began to think like a fish.

By looking at the world around him as a fish might, Hirvonen, a behavioural ecologist at the University of Helsinki in Finland, had come to realise that the salmon he bred lived, until their release, pretty dull lives. Raised in barren tanks, they swam in water that flowed at a constant, sluggish rate. They ate the same food pellets, at the same time, each day.

Having so little to do, he pondered how woefully unprepared they must be for the wild future that awaited them; a world of turbulent, ever-changing rivers and oceans, where young fish must learn to eat and not be eaten, where they must learn the deadly art of survival.

Hirvonen, like other scientists, has come to question how fish are raised in hatcheries. Every year, all around the world, billions of these hatchery fish are released into the wild to bolster dwindling wild populations. Typically, less than seven of every 100 survive.

ould that be, some of these scientists are increasingly wondering, because these fish learn so little during their upbringing? Do young fish need to be motivated and intellectually stimulated?

In short, do they need to be entertained?

And could enriching their lives, and teaching them new skills, be key to the survivorship of countless individuals, and even the very future of a few endangered species?

It is unsurprising that people forget to think as a fish.

Fish are hard to relate to, says Culum Brown, a childhood snorkeler who grew up to raise and study fish and their behaviour at his laboratory at Macquarie University in Sydney, Australia. They aren’t expressive, we hear little of the noise they make and can’t read their faces.

Such prejudice has limited the amount of money spent on fish conservation, and led to a dearth of research into fish cognition, perhaps explaining why we tend to think of fish as stupid, citing anecdotal research that they have no more than a three-second memory.

Research is slowly revealing that fish can make friends and use them as allies when hunting, engage in tool use, a trait once attributed only to “higher” species such as humans and birds, and store information for several days or more. Fish from coral reefs and rocky shores that have to actively hunt for a living tend to be more intelligent than fish from duller environments, Brown adds.

Yet despite mounting evidence that captive fish are capable of learning basic life skills before entering the wild, hatcheries across the globe continue to measure success in the number of fish released.

“Every year in Australia, the fisheries minister gets up and says something like, ‘This year, we released 15 million fish from hatcheries,’” Brown says. “Everyone thinks, ‘Wow’.” But it’s the number that survive that counts. And that’s where learning how to entertain fish comes into its own.

A tale of two fish

Anne Gro Vea Salvanes, a behavioural ecologist at the University of Bergen in Norway, tells a tale of two fish she has studied.

The clever fish, Salvanes says, was raised in a hatchery with rocks, pebbles, and plastic plants, adornments that provide mental stimulation. The dumb fish was raised in a bare tank, the usual environment for billions of hatchery fish.

When Salvanes and her colleagues examined the fishes’ brains, they found that the fish raised with adornments had increased brain activity in a region linked to spatial learning.

It would seem simple then, to embellish fish tanks the world over. But adding rocks and plants has a drawback - they get covered in food pellets and fish excrement, making tanks difficult to clean and encouraging bacteria to grow. That raises the costs of rearing fish, damaging the profits of commercial hatcheries.

Some researchers have started experimenting with items that can be easily removed and cleaned or discarded.

Joacim Näslund, a graduate student at the University of Gothenberg in Sweden, adorned tanks at a hatchery in Norway with plastic pipes and shredded plastic bags.

In the wild, Näslund says, fish such as trout and salmon hide under anything they can find – grass hanging over a riverbank, plants, rocks, logs. Or they lurk in the shadows cast by all these structures. So he wasn’t surprised when his fish started burrowing under the plastic.

Curious to see if those burrowing fish also experienced less stress, Näslund turned on a cake mixer, and used it as an artificial predator to chase fish from both non-enriched and enriched tanks.

The fish that had learnt to burrow had lower levels of cortisol, a hormone released during times of stress, in their blood. “Shelters protect against these kinds of unexpected challenges,” Näslund says.

But do fish that have been entertained in their youth really fare better later in life?

Some results are not yet in; Salvanes and her team recently released 10,000 juvenile salmon into the Voss region of Norway, hypothesising that more of the salmon from the adorned tanks would make their way downstream.

Some results suggest the opposite may be true; the fish raised by Näslund, while less stressed, prioritise hiding over finding food. “They shelter instead of eating, and thus end up smaller and likely more vulnerable when they are released,” he says.

But others are far more positive. Heikki Hirvonen, the man who by thinking like a fish changed his approach to their welfare, has together with his research group made some startling improvements.

His team work at the Kainuu Fish Research Station, adjacent to the River Varisjoki, in close collaboration with the Finnish Game and Fisheries Research Institute. There, they started by training salmon to experience fear.

As with many fish, when a salmon is attacked by a predator, its skin releases a smell that warns other salmon. So Hirvonen’s team started adding odours to their fish tanks, of predators and of distressed salmon. Initially, their young fish fled upon smelling the distress signal, an innate response.

But they didn’t react to the predator’s odour. So Hirvonen’s team trained the fish to connect the predator smell with the warning smell, and soon they began to be scared of that odour too.

That training continues, while Hirvonen has also become interested in enrichment. “Previous enrichment methods I had seen and heard about, they were actually quite unnatural,” he says. “They put in whatever they had on hand.” Instead, he has focused on making the fishes’ lives unpredictable.

Not many plants or algae grow on the banks of the River Varisjoki, because the water itself is too variable. A thunderstorm, for example, raises the water levels by a metre or so within hours.

Inspired by this, Hirvonen has begun to make his fish tanks resemble flowing rivers, raising and lowering water levels and strengthening and weakening the current. To wreak more havoc, he even occasionally reverses the flow. Besides keeping the fish alert, the unpredictable current forces them to hunt for their food, as food pellets are thrown around by the water.

This approach has led to another less expected benefit.

In static tanks, dominant fish eat more, forcing hatchery staff to sort larger, more glutinous fish into separate tanks. But forcing fish to hunt for their food is an equaliser, and the fish grow more evenly.

Surprisingly, Hirvonen also found that fish in the dynamic tanks had one tenth of the parasites of fish in standard tanks, leading to lower mortality. Perhaps, he speculates, the fish in the enriched tanks were less stressed and therefore less prone to disease.

And out there, in the big bad world?

Hirvonen’s fish really do seem better equipped to handle nature’s vicissitudes. In a study presented at the International Society for Behavioral Ecologists conference in New York City in August 2014, Hirvonen examined the importance of a fish’s parents and its upbringing.

Typically, he says, hatchery fish are born to other hatchery fish, which erodes genetic diversity. Making matters worse, most hatchery fish grow up in highly unnatural tanks. So Hirvonen raised several generations of salmon, varying their parentage and the environment in which they were raised. He then released the fish into the wild.

Later he recaptured the fish, and examined their brains and what they had eaten. He found that fish born to wild parents and raised in enriched environments had better developed brains and had eaten more food of better quality.

So by thinking like a fish, scientists such as Hirvonen are making real progress in improving young fishes’ development. But do fish think as people do? Can a fish really be entertained? And what would the point of entertaining a fish anyway, beyond giving it a better chance of reaching adulthood?

Scientists are now investigating what fish actually like to do, and what motivates them. “We put [fish] in tanks and we put things in there but is that what they really want? Is this what they prefer?” asks Victoria Braithwaite.

To answer that question, she has been conducting psychological tests on fish.

Each fish is placed into a tank and made to swim across brightly-lit water, a task they dislike as they feel exposed. At the other side are a series of refuges, chambers of differing habitats. But to enter, the fish must push on a window leading to their desired habitat.

By counting how many times the fish push on a given window, Braithwaite can gauge their motivations. Trout, for instance, keep pushing to enter darkly coloured rooms, while zebrafish eschew any sort of vegetation. Many zebrafish consistently “head for chambers with nothing in them,” Braithwaite says.

“Asking what a fish wants is a bit weird, isn’t it,” she admits. But the answers will lead to good husbandry and improved welfare.

It is increasingly accepted that captive mammals need to be entertained. Those, such as zoo animals and pets, not allowed to socialise or left without mental stimulation become depressed, ill and incapable.

To improve the welfare of domestic pigs, for example, researchers have even designed an iPad game. The pigs do not play the game directly, but people can use it to direct a ball of light around a room that the pigs chase. Other interspecies games are in the works for zoo and shelter animals.

“We haven’t got video games for fish,” says Braithwaite. At least not yet.

Nor is it clear that fish even engage in play. But given the lengths we now go to to improve the lives of other animals, entertaining the billions of fish raised each year in hatcheries no longer seems such a silly idea.

It might be the key to their very well being and survival.