Why larger fish have a greater need for O2 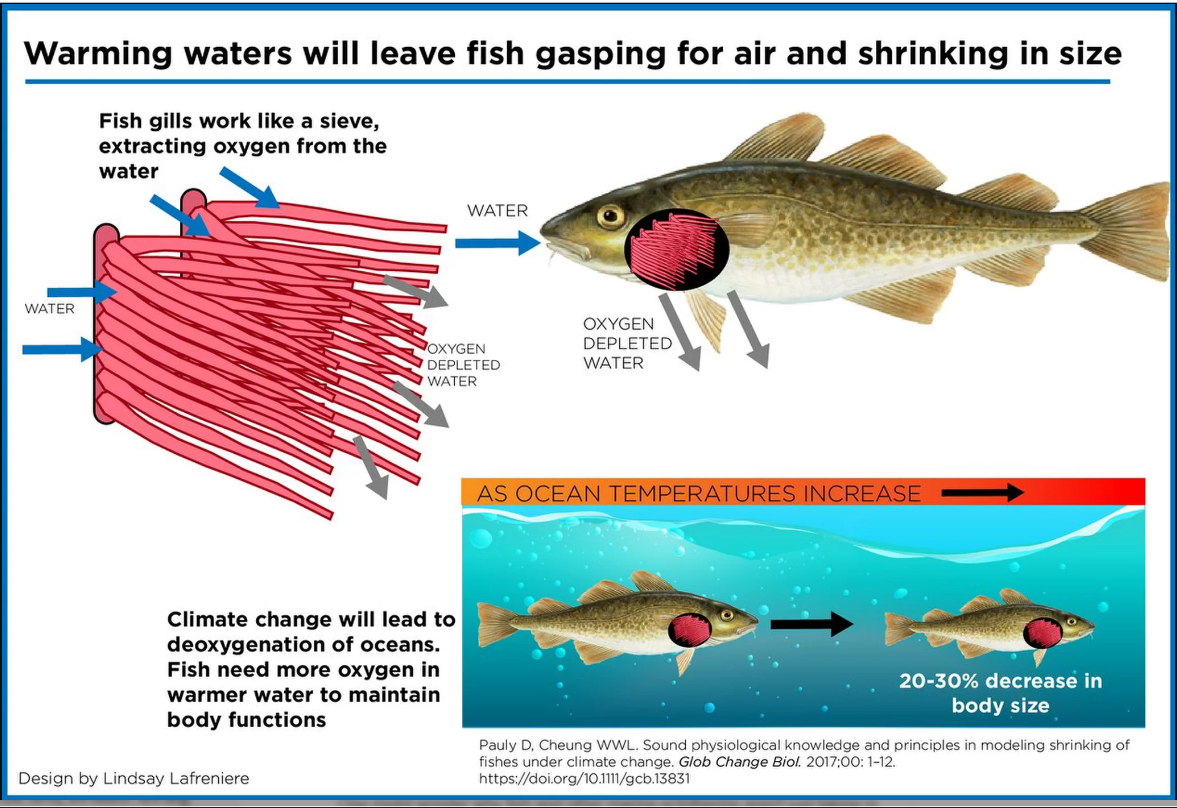 This article is about size change in fish do to global warming, but has an excellent description of why larger Koi require more O2 than smaller Koi.

Fishermen over the past several years have noted that fish appear to be shrinking. That observation was validated in 2014 by research that found commercially important fish stocks in the North Sea, such as sole, herring, and haddock, have decreased in maximum body size over a 40-year period. Scientists suspected that climate change was the culprit, but were unsure how warming waters could lead to fish shrinkage across entire species.

New research published in the journal Global Change Biology describes the mechanism that is likely causing fish to shrink. Lead author Daniel Pauly, a principal investigator with the Sea Around Us project at the University of British Columbia, said the findings apply to animals with gills, such as fish, sharks, squid, and lobsters.

Pauly's co-author William Cheung, director of science for the Nippon Foundation Nereus Program at the university, explained that these species and many others are ectotherms, meaning that their body temperature depends on environmental temperature.

"As the oceans warm up," Cheung said, "their bodies will do so as well. Higher temperature within the scope that the fish can tolerate generally increases the rate of biochemical reactions in the fish's body and thus increases their body metabolic rate."

Metabolic rate refers to an animal's oxygen consumption, which also naturally increases as fish grow into adulthood because their body mass becomes larger.

One might wonder why fish and other marine ectotherms aren't just taking in ever more oxygen to coincide with this natural growth due to maturation and the rise of ocean temperatures. They don't because at a certain point they cannot keep up.

The researchers point out that the surface area of an animal's gills — where oxygen is obtained — does not grow at the same pace as the rest of its body.

He and Cheung liken how a fish gill works to a car radiator. Both are made up of numerous thin layers that allow for the transfer of heat, which permits cooling. But both can only work in two dimensions because air or water pass through only once.

"There is not much that fish can do to solve this problem," Pauly said. "They can have bigger gills — just as sports cars have bigger radiators — but ultimately, the weight always catches up, and the ratio of gill surface to body weight becomes too low."

The researchers believe this set of principles, which they have named the Gill-Oxygen Limitation Theory helps to explain why so many populations of marine species are shrinking. They and others predict that the reductions will be in the range of 20–30 percent if ocean temperatures continue to climb due to climate change.

At the higher end of that range is one of the world's most important commercial fish: tuna.

"Tunas are active, mobile, and fast-swimming animals that need a lot of oxygen to maintain their lifestyle," Cheung said. "In fact, they have to keep swimming non-stop in order to get more water through their gills to obtain sufficient oxygen. Thus, when temperature increases, they are particularly susceptible to not having sufficient oxygen to support their body growth."

He added that for a 2 degree Celsius (3.6 degree Fahrenheit) increase in water temperature, which is approximately what is expected to occur in oceans around the world by the mid-21st century, tunas such as the Atlantic bluefin tuna will potentially decrease in body size by 30 percent.

Sharks, many of which are already threatened with extinction, are also predicted to decrease in size, especially larger species.

In the case of tuna, haddock, cod, and other fish consumed by humans, shrinkage is predicted to decrease potential fisheries production. Since marine ecosystems are structured in part by the body size of organisms — basically larger fish eat smaller fish — the projected changes to body sizes will likely affect predator and prey interactions, as well as ecosystem structure and functions, Cheung said.

He said the most effective way to prevent these problems from occurring is to mitigate carbon dioxide emissions.

"Our model projections show that the lower the emissions and thus warming, the smaller is the change in body size," Cheung explained. "Also, overfishing is reducing fish body size, so eliminating overfishing can help to reduce the extent of fish shrinkages."

Meeting the emissions reductions targets of the Paris agreement on climate change would also bring substantial benefits, he added.

The researchers believe that the tropics will be hardest hit by a reduction in fish body size since coastal communities in these regions are very dependent on fish stocks for their diets.

Not all marine species are expected to shrink. Notable exceptions include whales and other air-breathing marine mammals. They are facing other risks brought about by climate change.

"Their problem," Pauly said, "is getting rid of heat, like cars, since their flukes serve as radiators."