This information was first posted in our "Question of the Week." 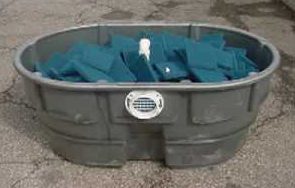 Which of the following is NOT recommended for use as filter media - hair rollers, lava rock, Japanese matting, Kaldness media, Matala or bio balls?

The correct answer is actually lava rock.  First, let's think about what a filter is, and then we'll discuss media.  A filter is nothing more than a home in which to grow beneficial bacteria.  For beneficial bacteria to thrive, they need a place to cling to (they can't reproduce well when free floating - they need a 'home') , food, oxygen and good conditions.

The filter media is the place for the 'good' or beneficial bacteria to colonize.  Actually, there are 2 colonies of beneficial bacteria in a filter - one which turns ammonia to nitrite, and one which turns nitrite to nitrate. These bacteria cling to a surface, and wait for the water to bring them food.  For food, one colony uses ammonia from fish waste, while the other colony uses nitrite from the waste of the first bacterial colony.  All living things, including beneficial bacteria, consume carbonates as well, so those need to be provided - but that's a topic for another time.  Good conditions come in the form of acceptable water temperatures and other water parameters.

Lava rock was used extensively as a filter media, but it has fallen out of favor due to the availability of so many better materials.  The supposed benefit of lava rock was that the rock had millions of small pores, and thus it had lots of surface area for the beneficial bacteria to cling to. The problem is that the tiny pores clog very easily, and then the water can only flow in the larger channels (called 'channeling'), such that the flow of water is not bringing food to the bacteria in the pores. The only bacteria alive are the ones that live in the large channels, and there are just not enough of them to do a good job of consuming the ammonia in most ponds. In order for a filter medium to be good, it must provide a large surface area that is not susceptible to 'channeling.'  Any of the more modern materials do that well - Japanese matting, Matala, Kaldness media, bio balls and other bead media - and yes - even plastic hair rollers fulfill the requirement of large surface area without susceptibility to channeling.  Obviously,  some are better than others.  It's useful to compare potential surface area to price to help select an optimum filter medium.