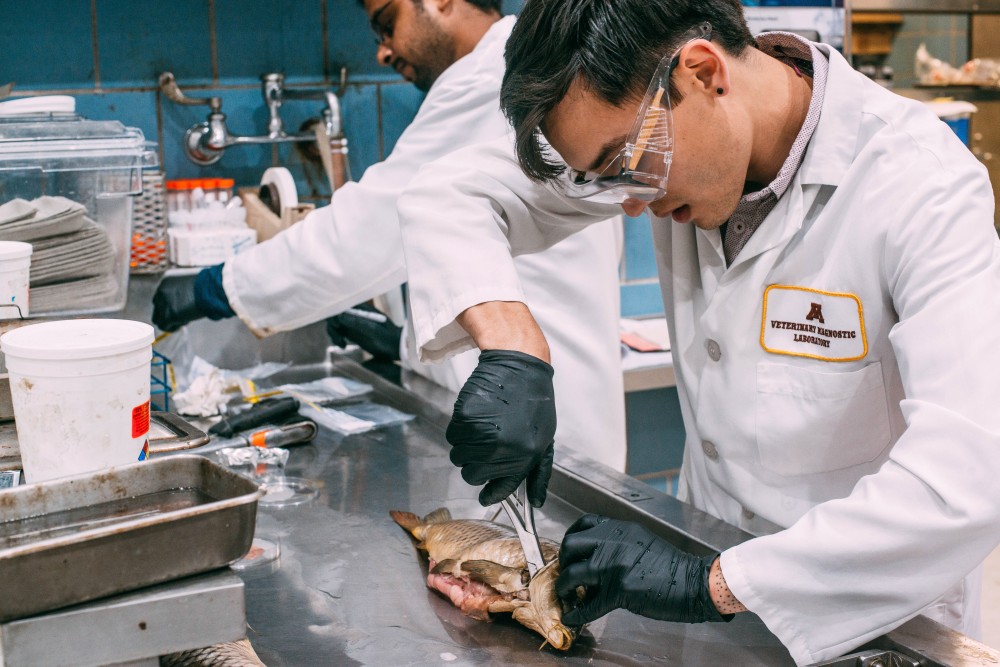 Researchers at the University’s Minnesota Aquatic Invasive Species Research Center (MAISRC) in St. Paul have been studying the usage of Koi herpesvirus (KHV) — responsible for recent carp deaths in Minnesota lakes — for potential bio-control of invasive carp. Koi fish are a subspecies of common carp, making them both susceptible to the virus. “We want to find ways to kill carp and zebra mussels and all these invasive species,” said MAISRC Director Nick Phelps. “We started this particular project in 2014 — went two years and didn’t see [the virus] anywhere, then saw it in seven to eight lakes in a matter of a month and a half.”

MAISRC first confirmed a naturally-occurring case of KHV in Elysian Lake in early August. Researchers confirmed cases in several more lakes on Friday. “We initially ran a lot of tests and they all came back negative,” said Meg Thompson, a first-year Ph.D. student at MAISRC. “And then we finally got a positive result. All the sudden there was an explosion of the virus around the country. It’s exciting to be at the forefront of this.”

Isaiah Tolo, another first-year Ph.D. student, has taken on an active role in the project, conducting many of the dissections and driving to Minnesota lakes where KHV may be present. “Carp have been here for more than 180 years, and they often wreck lake environments,” Tolo said. “It’s a big problem here.”

Tolo and fellow researchers dissected several bags of carp sent from various Minnesota lakes on Tuesday confirming more cases of the virus. Tolo said it’s important to educate the public on mass fish kills. “It can be a little alarming when thousands of fish wash up on the shore. People wonder if the water is safe,” Tolo said. “We want to let them know what fish kills are and what they can do to report them.”

Through a MAISRC website, members of the public can report fish die-offs. The site lets people click on a lake, fill in data about their discovery and send the data directly to researchers like Tolo — who then travel to the lake with testing materials to assess causes of death. Phelps said the research team wants to release the virus in Minnesota lakes to curb the spread of invasive carp. The disease wouldn’t threaten other fish species, he said, because of its specificity to carp. “We’ve never found it in a walleye, musky or bait fish,” Phelps said.

Phelps said MAISRC hopes to learn from researchers in Australia, who have spent the last 10 years looking into bio-control as a means of eliminating carp in their country.

The Australian government plans on releasing KHV into the environment next year.

“It’ll be the first time that pathogens will be used for aquatic animal control,” he said. “They’re pushing the envelope a bit, so we’re sitting back and learning what we can from that experiment.”