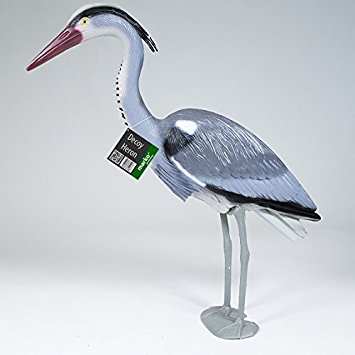 This article is by Syd Mitchell, our Water Quality instructor extraordinaire!  In this article, Syd discusses various techniques that work with different predators.

The original Magoi from which koi as we know them today were bred, were dark and inconspicuous which made them less noticeable to predators but selective breeding has produced the brightly coloured koi we now keep in our ponds making them a much more visible target.  Arguably the most common predator that a koi keeper has to guard their pond against is a heron.

A common deterrent is the plastic heron. It is said that placing one of these by the pond will be a good deterrent because herons are solitary, territorial birds so a real heron flying over will assume that spot is already taken.  Herons are intelligent and are not so easily fooled. If a real heron sees the same replica bird in the same position every day, it may be deterred for a while but they will soon learn that its “rival” is a fake. One amusing story I heard tells of a real heron that had become so used to a fake heron that it used to land on the decoy’s head in order to use it as a vantage point to look for the best fishing position in the pond.  If decoy herons are used they should be regularly moved in order to keep up the deception.

I once had a heron problem and used the fishing line technique to prevent herons getting into my pond. I placed strands of strong fishing line around it as a barrier. This worked well for a while and we would occasionally see a heron walk around the pond, leaning against the line looking for a way in until it realised it couldn’t reach my koi and eventually flew off in disgust.

For some unknown reason, foxes soon began chewing through the fishing line leaving gaps where the heron could enter. I solved this problem by replacing the line with an electric fence. These give predators a short, sharp “zap” which doesn’t harm them but is sufficiently unpleasant that it makes a good deterrent.  The voltage deters many other predators but isn’t sufficient to affect a heron because their feathers are too thick and act as insulation but it still provides an effective barrier and no fox or other animal will want to chew through it and leave an entry point.

Other predators that are easily deterred by an electric fence include the mink that have now set up breeding populations after having been released by well intentioned, but misguided animal liberation campaigners.  Mink are voracious predators that have devastated indigenous wildlife populations and see a koi pond as just another feeding opportunity.  They are mostly nocturnal so they are unlikely to be seen, although their pattern of attack can give them away.  They pull fish out of the water and begin to eat it either from the head or from the tail to prevent it flapping around while they are eating it. If the fish is too large for them to eat as one meal, the half eaten remains showing signs of being consumed from one end can indicate that the attacker was a mink.

For an electric fence to be a deterrent against mink or similar predators, an additional strand should be placed just above ground or coping level to prevent them slipping underneath the higher strands.