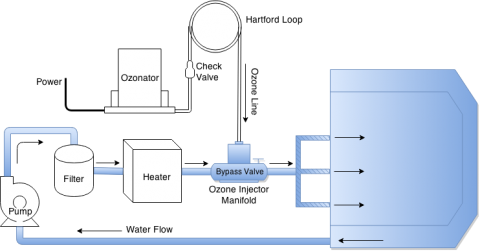 Ozone has been used to sterilise water in swimming pools for many years because it is very corrosive and has a devastating effect on harmful bacteria that would cause cross infection from one bather to another. Manufacturers and suppliers of pond equipment are always looking for new products to sell to pond keepers and so it was only a matter of time before they made lower power ozone generators for koi ponds. The principle of operation is simple.

Single atoms of oxygen (O) do not like being on their own so they join up in pairs, which is why we refer to oxygen as O2. In an ozone generator, an electrical arc or UV lamp splits up some of the pairs and forces them to join up in threes (O3) but this is an unstable relationship. So, the third atom soon breaks away and looks for a new partner. If it finds another single oxygen atom, it makes a new pair (O2) and is no longer corrosive but if it should bump into an organic cell it will "burn" its way in through the cell wall and, in doing so, the cell will be fatally damaged by a process called lysis.   This is most easily described by imagining the cell as being similar to a balloon half filled with liquid.  If the balloon is punctured, the contents will leak out.  In the case of an organic cell, as its contents leak away, it rapidly dies.  Bacteria are single cell organisms, so if their only cell is damaged then they will be killed almost immediately on contact with water containing ozone.

But ozone is indiscriminate. It doesn’t only kill harmful bacteria, it will destroy any living cell it meets – good or bad.  This is why, when ozone is used to sterilise swimming pools, the water has to be drawn water from the pool, sterilised in specially designed equipment and then, to prevent its corrosive effect on bathers, all trace of ozone must be removed before the water is returned to the pool.

In the case of koi ponds, if water is drawn from the pond, sterilised in external equipment, and then any free oxygen atoms are removed before the water is returned to the pond, then I would be happy to recommend its use.  But this equipment has to be installed and maintained properly. It is not a handy add-on that can be plumbed into a pond without full knowledge of how it works and the risks involved.  Other types of ozone generators that are designed to inject ozone directly into water returning to a pond are a different matter.  Fortunately, all these types of units that I’ve seen are very low power.  Their ozone output is low which means that the corrosive effects on koi and good bacteria in the biological filter are not great.  The koi self repair system replaces damaged cells as quickly as they are being damaged and beneficial bacteria can easily multiply to replace any bacteria killed by ozone circulating through the bio-filter.  But if direct injection ozone systems cannot cause enough damage to a colony of filter bacteria to wipe it out, the question I would ask is can they really have a significant effect on any harmful bacteria that might be in the pond?