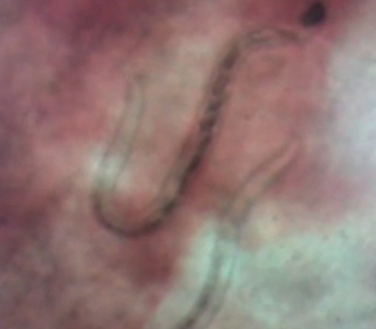 Parasites are discovered in carp in the mid-Murrumbidgee region of Australia, as testing was being done prior to the proposed release of KHV to control carp in the Murry-Darling basin.

Researchers fear a parasite discovered in carp in the New South Wales Riverina could target native fish if carp are removed after the release of the herpes virus.

It has prompted calls for more research, with concern people could get sick if the parasites were passed on to humans.

Associate professor Shokoofeh Shamsi, from Charles Sturt University's Graham Centre in Wagga Wagga, was part of the team that found the parasite in carp in the mid-Murrumbidgee.

"The natural hosts for these parasites are fish-eating birds, and when they defecate into the river system, carp are readily there and grab the parasites," she said.

"You could say they protect our native fish from infection from the parasites.

"If we get rid of carp, we don't know what will happen to these parasites that are waiting to find a host."

Dr Shamsi said research about parasites was limited in Australia, but there were reports of people getting sick after eating infected fish.

She wants more research to be done before the release of the carp herpes virus.

"Our research doesn't say whether or not the carp herpes virus should be released, but we haven't done much research about parasites in carp and the transmission of parasites between carp and native species," she said.

"We don't know because we don't have any evidence, but I wouldn't be surprised if we did research and we found native fish in the presence of carp already have some of these parasites," she said.

"The question is, if you remove the carp, what happens with excess pressure from these parasites on native fish species?"

Parasite issue to be explored in more detail

The findings, which were published in the University of Cambridge's Journal of Helminthology, have been largely dismissed by the coordinator of the National Carp Control Plan.

Matt Barwick said parasites were naturally occurring and the research confirmed what was already known.

"I think it's the prerogative of any researcher to call for more research in their area of expertise," he said.

"Our focus is making sure we understand the key risks and we can manage them."

Mr Barwick said parasites had come up as an issue that needed to be explored among a range of priorities.

"We have funded an issues paper to bring together experts to look at this in more detail, and understand how significant this particular risk is," he said.

"We're actually going to be embarking on one of the most detailed quantitative risk assessment processes to understand all the social, economic and ecological risks, and this would logically be picked up in that as well."