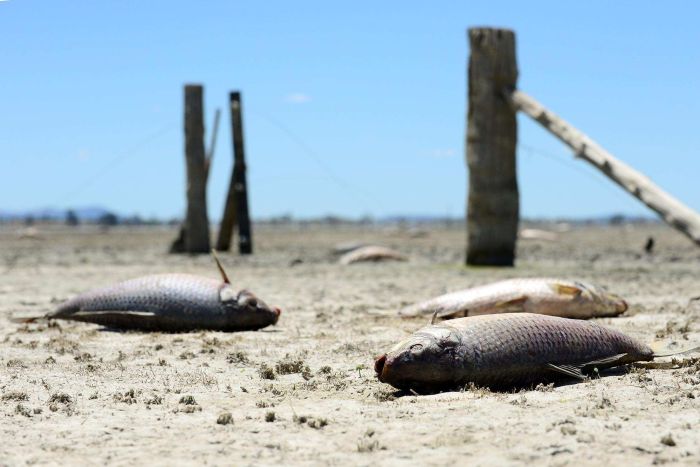 European carp infected with a strain of herpes will not pass the virus — or any other diseases — on to water users who come into contact with them.

That's the finding from a recent study by the National Carp Control Plan (NCCP) and Australia National University, which are assessing the risk of releasing the virus as a bio-agent to kill populations of European carp in Australian waterways.

European carp are a pest in many Australian rivers and lakes, where they cause significant environmental damage and are estimated to have a negative economic impact of up to $500 million a year.

The NCCP is investigating the possible environmental impacts of releasing a species-specific strain of deadly herpes, but needed to be certain there are no risks to human health.

Matt Barwick, the coordinator of the National Carp Control Plan, said the herpes strain is not a zoonotic disease, meaning it cannot be passed to humans.

"This virus has never moved from the species it infects, which is common carp, but we wanted to be absolutely certain," he said.

"We engaged some experts in zoonotic diseases, which are pathogens that have an ability to move from animals into a human host, even though the virus is not one of those.

"The research shows there are absolutely no human health considerations associated with this virus, so we can effectively close the book on this," he said.

Carp have dominated the Murray-Darling Basin since the 1960s, and now make up 80-90 per cent of the fish biomass in the river system.

Researchers are spending 2018 gathering large amounts of data to help inform state and federal environment ministers, who will decide at the end of the year if the $15 million plan to release the virus goes ahead.

While researchers are now confident infected fish won't pass on diseases directly to humans, there are growing concerns about how millions of dead fish could affect water quality.

"That is not to say we won't need to use safety equipment very carefully if undertaking clean-ups, because while the virus itself doesn't infect humans, we still need to consider water quality," Mr Barwick said.

Concern about water health has seen critics of the plan emerging in the iconic Lower Lakes and Coorong region of SA, who believe releasing the virus into the Murray-Darling system is fraught with danger.

Local fisherman Gary Hera-Singh, who lives at Meningie on Lake Albert, near the mouth of the River Murray, says the virus will be a shock to the basin's ecosystem.

"I can't get my head around this, it blows my mind," he said.

"The risks and logistics of having such a large magnitude of carp washed up and creating a horrible pea soup that will be a toxic swirl for anything else that lives in it is nonsense, it's not a smart move," he said.

"I understand the eastern seaboard is really keen for this to happen, but it's unknown about particularly the water quality impacts."

Mr Hera-Singh is worried about a potential "blackwater" event, which occurs when large populations of fish die, decompose and remove oxygen from waterways, killing other fish in a system.

Coorong Mayor Neville Jaensch said the possibility of that happening frightens many in his community.

"There is a lot of fear in this and one doesn't want to panic people, but we want the community and all government bodies to be fully informed of what will take place, and what will happen if it fails," he said.

"There are so many layers of this that do concern us.

"We want absolute guarantees, rock solid that things are going to work — it has to be proven and I know they [the NCCP] are working on that as we speak."

However, Mr Barwick said it is impossible to give assurances to stakeholders that there will be no adverse outcomes.

"In terms of the suggestion by some that zero risk is desirable, we don't live in a zero risk environment today, blackwater events already occur today," he said.

"The research we are doing to understand how removing carp numbers might impact water quality and manage that will help us better understand water systems."

However, Mr Barwick defended that admission by saying leaving the carp in the river is equally — if not more — risky, as it will continue to put pressure on the system.

To test the likelihood of a blackwater event caused by dead carp, earlier this year the NCCP dumped dead carp in a small wetland near Berri in South Australia, waited until they decomposed, and then assessed water quality.

The trial, which involved filling a 2.5 hectare wetland with 6 tonnes of dead carp, is being used to determine what could happen on a larger scale if the virus is released in parts of the Murray-Darling Basin.

"The analysis of that work is going on right now and it's still early days," Mr Barwick said.

"It is revealing what all of us would intuitively know, that there are thresholds in carp biomass that start to impact water quality.

"What we know is under an absolute worst case scenario where there is a lot of carp and no clean-up taken, under certain conditions water quality can be impacted, although we would be looking to undertake careful clean-up activities in priority areas."

Early estimates show there could be between 500,000 and 2 million tonnes of carp in the river system.

The NCCP is currently trying to clarify that, then determine what percentage of that would be killed by the virus.

Coorong mayor Neville Jaensch says this is the biggest concern for communities downstream in the River Murray, or those who live near weirs where the river is blocked.

"There is a considerable biomass, probably in the hundreds of thousands of tonnes, if not millions for the Murray, so the aspect from council is who is going to be responsible for clean-up?" he said.

"We as a community, with the large surface area of water and boundaries [such as the Lower Lakes], find we will be stuck picking these things up or not being adequately funded to get them out," he said.

More worrying for Mr Jaensch is that downstream communities like his are being considered as possible sites for the first release of the virus should the plan go ahead.

"It would involve potentially working downstream and travelling upstream from dam to dam, by releasing them and then cleaning up and then moving on," Mr Barwick said.

"That is a strategy we are exploring, but there are others before, so currently we are trying to work out which one is best."

Fisherman Gary Hera-Singh said he is doubtful claims of native fish returning once the carp are destroyed will eventuate, because problems with the river go beyond just European carp.

"Native fish require a fast-flowing river but we have stopped all that without weirs, dams and locks. We have created a whole series of lakes, a series of 2000 gallon lakes from the top of the river all the way down," he said.

"I don't see native fish benefiting at all.

"What I see is there will be another invasive species take over that vacuum that the carp removed.

"Redfin perch, Gambusia, Oriental weatherloach, who knows, but I don't see native fish benefiting much at all."

Mr Barwick said the fact the Murray-Darling is made up a system of dams should be seen as an opportunity, as it means the virus can be released in phases in different sections, making it easier to contain.

"It turns out our native species of fish don't like still water, but carp love it. So we have created the ultimate environment for carp to thrive, and they did," Mr Barwick said.

"The entire research community and policy makers working on this acknowledge our waterways have been affected by numerous things, but we are also very clear on the fact that carp are one of those things."

"The fact there are other pressures affecting our waterways doesn't mean taking action against carp has no value."

Mr Hera-Singh argues another option is needed, even if it takes longer.

"If it takes 30 to 50 years to get rid of them in a strategic way, then that's positive, but using a virus is a sledge hammer — it all happens in a week."

The final plan will be presented to the Australian Government by the end of the year, and will also need approval from state governments.