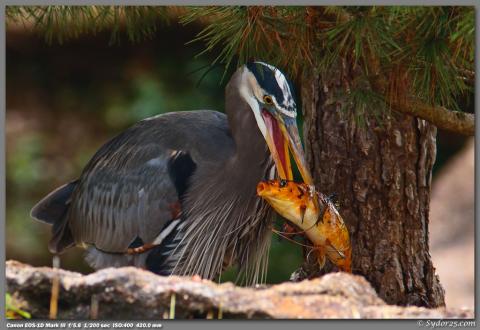 Evolution has ensured that any species of animal which is a natural prey for a predator will have evolved a colouration that helps it blend in to its background, making it less easy to spot. The original Magoi from which koi as we know them today were bred, were dark and inconspicuous but selective breeding has produced the brightly coloured koi we now keep in our ponds. This makes them a highly visible target for predators. Arguably the most common predator that a koi keeper has to guard their pond against is a heron. British herons are not migratory and so they can attack a pond at any time of the year and they are especially active when they have young to feed during their breeding season which starts as early as February.

They feed on many different animals that live in or around natural waterways, including frogs, water voles and even young birds but their most common food is fish which they hunt by standing motionless, either at the water’s edge or after having waded into shallow water. When a fish swims by they will stab at it, possibly several times, to disable it before grasping it in their beak. This means that when a heron targets a koi pond, even the ones that it doesn’t quite succeed in catching and eating may be scarred or badly injured.   And it isn’t only those small enough for it to swallow that are at risk, if a heron can succeed in disabling and grasping larger fish it will pull them out of the water and dismember them.

There are two common beliefs about herons. The first is that, because they are a solitary bird, placing a plastic heron by the pond will be a good deterrent because a real heron flying over will assume the spot is already taken. The second is that herons don’t land on water.  But two stories show that these beliefs aren’t correct. On amusing story tells of a koi keeper who bought a plastic heron as a deterrent and said that it was now being used by a real heron as a perch to provide a vantage point to look for an opportunity to get at his koi. Another story tells of a heron that was seen to land on a lake, float for a while, then stab and catch a fish and take off again. The landing and take-off were described as very ungainly but the heron was successful in catching its dinner.

So if we discard the idea that a plastic heron will keep our koi safe and also bear in mind that a heron can land in water, what can be done to protect them?

Nets are one obvious method but they can spoil the look of a pond and make maintenance difficult.  A good choice that seems to be successful and is less visually intrusive is a strong fishing line or electric fence around the pond. If a few strands of fishing line are stretched over the pond so that a heron can’t land directly in the water, protection will be complete.

Movement activated water jets are another possibility but if you use one, make sure that the water supply to them can be turned off before approaching the pond - they don’t distinguish between herons and humans.