KHV in Mississippi River in the 90's

While the Australians are interested in the effects of the carp die-off caused by KHV, what is of interest to Koi keepers in the USA is the fact that KHV was documented to be around in the wild in the 1990's.

Recent research shows the very same carp virus being considered for use to control carp in Australia is the chief suspect in causing the multi-decadal population collapse among Common carp in the Upper Mississippi River System in the United States.

“This study shows carp numbers dramatically declined along one of the largest and most iconic river basins in North America since the 1990’s after nearly a century of carp infestation, and have remained suppressed since then”.

“Importantly, these researchers looked at a range of possible causes for the population crash in carp, and concluded that the Carp virus currently being considered for use in Australia was the most likely cause”.

“It was particularly interesting to see that the richness and abundance of native species including Bluegill – a fish species native to North America that angler like to catch – exploded as carp numbers dwindled” (see figure below from the study). 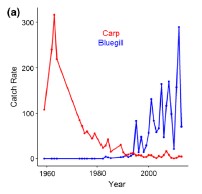