How a Koi became a Dragon - the Waterfall Legend 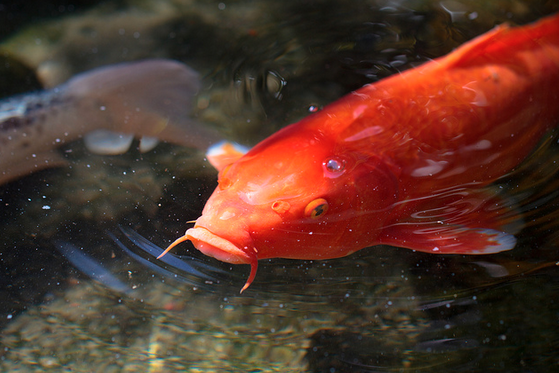 Did you know the legend of the waterfall, where a single Koi were rewarded for its perseverance and determination and turned into a dragon?  Read on, after the break...

One particular legend is the Koi fish’s claim to fame. An ancient tale tells of a huge school of golden Koi swimming upstream the Yellow River in China. Gaining strength by fighting against the current, the school glimmered as they swam together through the river. When they reached a waterfall at the end of the river, many of the Koi turned back, letting the flow of the river carry them away.

Koi fish are associated with positive imagery. Because of the dragon legend, they are known as symbols of strength and perseverance, as seen in their determinative struggle upstream. And because of the lone Koi that made it to the top of the waterfall, they are also known as symbols of a destiny fulfilled. Resulting from its bravery in swimming upstream, the Koi is oftentimes associated with Samurai Warriors in Japan. The integrity and high sense of character Koi are known for makes them a popular tattoo choice both in Asia as well as America.

The Koi is known for its strength, individuality, character, and perseverance.

Koi fish are also symbolized according to their coloration. Black Koi represent masculinity. It also signifies a patriarchal role. Gold Koi symbolize prosperity and wellbeing in business. Blue Koi, often associated with the role of the son, represents tranquility. Red Koi represent strength and power. It also is recognized as the matriarchal Koi.

Whatever the legend or color, Koi fish will always carry a positive weight. Whether it be good fortune, longevity, perseverance, or courage, the Koi fish encompasses it all.