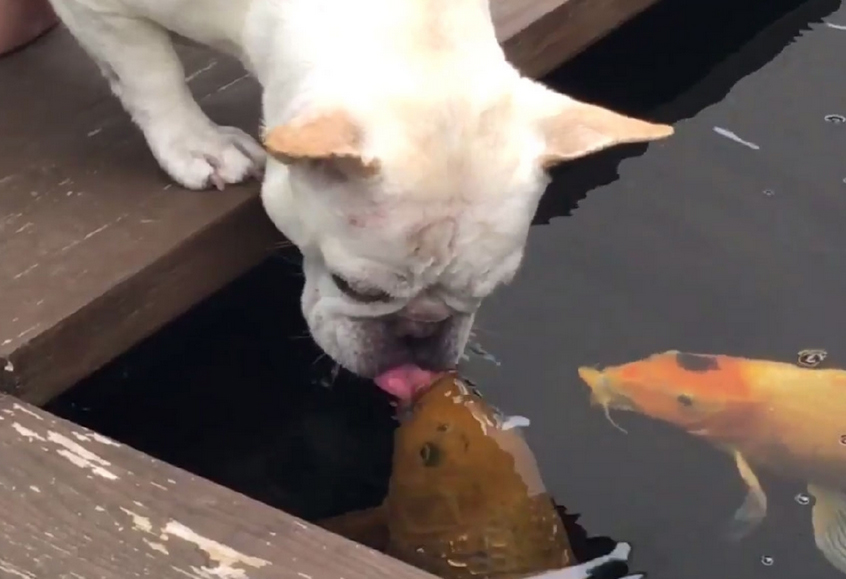 Did you know that Koi frequently become buddies with other creatures?  This time - it's a French Bulldog named Daisy...

A Federal Way French Bulldog, named Daisy, developed the unusual bond about a year ago, according to her owner, Carrie Bredy. Bredy and her husband were expanding their backyard Koi pond and added a Chagoi Koi, named Frank.

The Bredys quickly realized that while there were plenty of fish in the pond, there was only one in the eyes of their oldest pooch.

"Daisy just started begging to go to the pond -- and every single time, Frank comes straight to her," Bredy said. "She ignores the other fish. She goes straight to him. If he's all the way at the other end, he comes flying across from the water."

Bredy has chronicled the love story on Facebook and Instagram, drawing the attention of thousands of people across the globe. She has two other French Bulldogs, Tomato and Walter, along with 11 other fish.

"Out of the three dogs, none have paid any mind to the pond except Daisy," Bredy said. "French Bulldogs can't swim -- which makes it the tragedy of unrequited love."

Check out the link for a great video!  http://komonews.com/news/local/a-fish-tale-local-dog-and-koi-fish-form-u...