Fish may shrink due to global warming 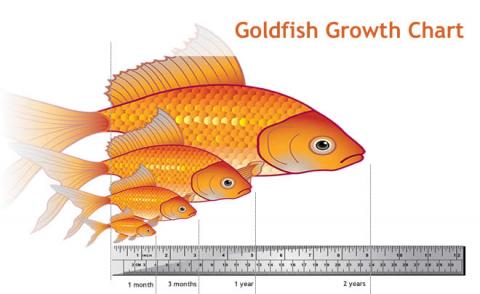 When the water temperature is higher, our Koi require more oxygen.  Read about how global warming may affect all fish species...

"Fish that are in water of higher temperature have a higher metabolic rate, meaning they have to consume more oxygen." Daniel Pauly, a fisheries scientist at the University of British Columbia. "Because essentially the whole metabolism, all the chemical reactions in your body, are accelerated."

So, how about growing bigger gills to allow for more oxygen intake? Pauly did the physiological math, and concluded that bigger gills won’t do the job. Because he says gills, being relatively two-dimensional, simply can't keep up with the three-dimensional growth of the rest of a fish's body.

Instead, Pauly's calculations suggest that, to feed their increasing need for oxygen, fish of all kinds may actually shrink as a result of climate change. With decreased supply, they’ll need to lower demand. The study is in the journal Global Change Biology. [Daniel Pauly, William W. L. Cheung, Sound physiological knowledge and principles in modeling shrinking of fishes under climate change]

Which means future fishermen might find a lot of lower-value small fry in their nets.