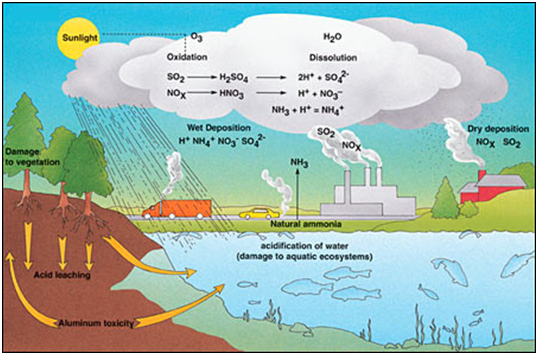 More than three-quarters of the earth's atmosphere consists of nitrogen, yet only four-hundredths of one percent of the mass of the oceans, atmosphere, and earth's crust is composed of nitrogen.

Although nitrogen is not a major component of oceans and land masses, it is an essential element for the formation of proteins in both plants and animals. Rainwater does the critical job of transferring nitrogen from the sky to the soil.
The Chemistry of Nitrogen

Nitrogen gas is a very stable two-atom molecule that doesn't easily interact with other atoms or molecules. For example, although three-quarters of every breath you take consists of nitrogen, none of that is metabolized by your body. The same is true of nearly all plants -- they can't take nitrogen directly from the atmosphere. In fact, legumes that can take nitrogen from the atmosphere don't do it directly, but through a symbiotic relationship with "nitrogen-fixing" bacteria in their roots. The bacteria "breathe" in nitrogen and convert it to compounds that the roots can absorb.
Nitrogen and Water

A 2004 study of the chemical composition of rainwater at 48 sites in 31 states found nitrates in nearly all the samples, although there was a high degree of variation in both time and space. Several studies in the 1990s showed that locations along the coast of the Gulf of Mexico could expect to get 18 pounds of ammonium and nitrates per acre per year from rainwater. That's about a tenth of typical nitrogen requirements for growing crops.
The Good and the Bad

Because rainwater contains nitrogen in forms that plants can absorb, and plants need nitrogen to grow, farmers have noticed that rainwater stimulates more plant growth than water from other sources. That's good, in that farmers don't need to apply as much artificial fertilizer. However, in some cases human activities result in an excess of nitrogen in rainwater. That has the effect of throwing off the balance in some fragile ecosystems where some plants -- typically algae -- that are normally limited by a lack of nitrogen now have enough extra nitrogen from rainwater to choke out other organisms.