Read the story about what could be the oldest goldfish by clicking on the title or picture.

Most pet goldfish live between five and ten years. But some goldfish apparently have other ideas. Here’s an amazing post about a pet goldfish called Splash who has just celebrated his 38th birthday!

In 1977 Richard and Ann Wright’s young children won a little goldfish at a local funfair. They took him home and named him Splash. Astoundingly, Splash is still alive! He’s just celebrated his 38th birthday. The tiny fish has lived through two Gulf wars, the assassination of John Lennon, Charles and Diana’s wedding, and the 2012 London Olympics. That’s nearly four decades of history!

Sadly, Splash’s tank-mate, Splish, died two years ago. Splish was no spring chicken either, and was 30-years-old when she died. Luckily, Splash has continued t thrive despite Splish’s death. The Wright family claims that they haven’t done anything special to extend their goldfish’s life span. Maybe the lucky little fish just has good genes!

The 71-year-old owner of Splash the Goldfish says:

“He looks as if he’s coping fine but I’ve no idea how he’s still alive. It feels like he’s been around forever and he’s even outlasted our children living at home with us.”

“We’ve never done anything out of the ordinary to care for Splash – we’ve been blessed with a really hardy fish who’s lived through it all.”

Although the death of Splash’s was the most traumatic event in his life, he seems to have already recovered, according to Mr. Wright:

“Not much has changed since then really – Splash just swims around looking happy as he always has but I’m sure he grieved for Splish.”

“They were a double act for such a long time it’s been a bit odd seeing Splash on his own but he’s still battling through which is fantastic.”

“We certainly didn’t expect Splash to live this long – it’s incredible. The children eventually grew up and left home but Splash has stayed put with us – he’s really part of the family.” 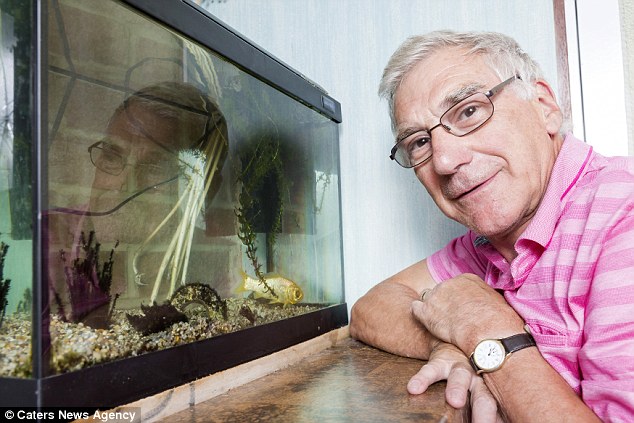